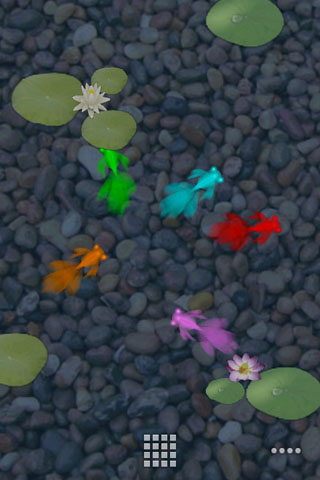 aniPet Goldfish is the 1st live wallpaper of aniPet series, it simulates goldfish swimming in a pond with lotuses. You could select the number of goldfish in the pond, change the speed, customize their colors, feed the goldfish, and move around the lotuses.

Running aniPet Goldfish as a normal application only gives you the help page with the usage and version information.

How to use aniPet Goldfish Live Wallpaper

To move around the lotus:  First tap on the lotus to select it, the selected lotus turns to red, then touch down and move to relocate it.
To feed the goldfish:  Tap on any empty area without lotus, different food will drop down to the pond.